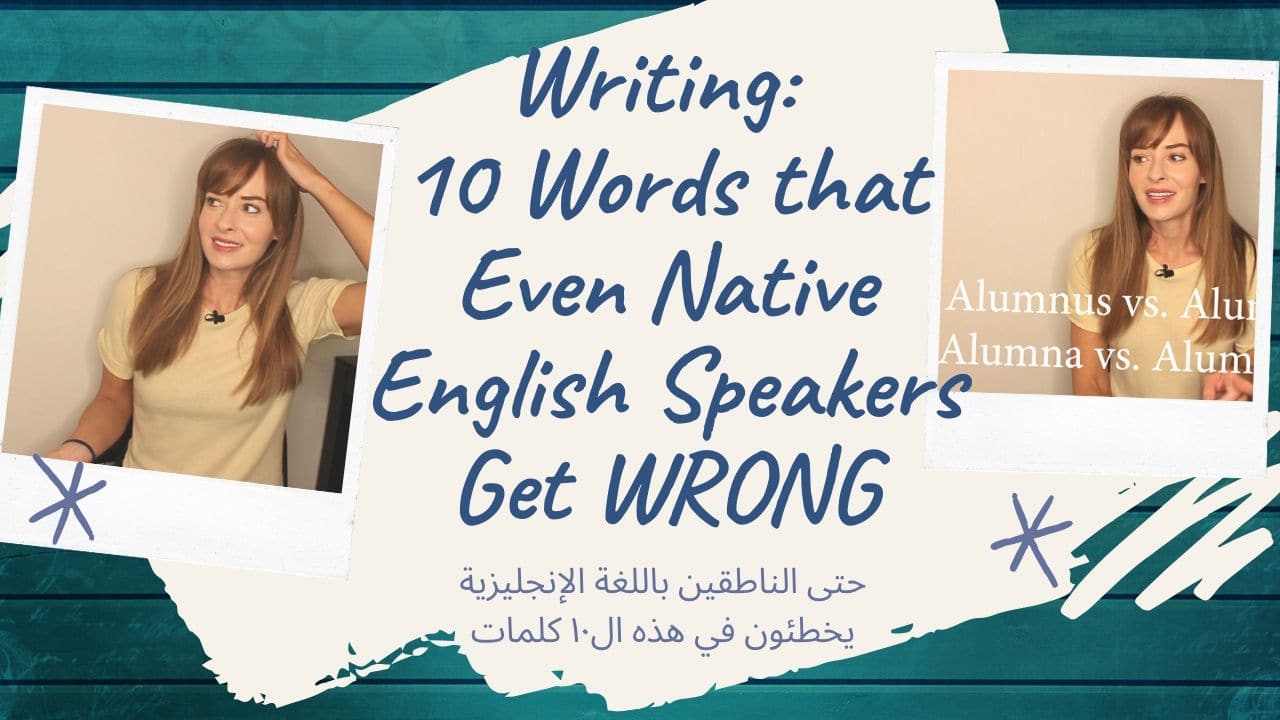 I decided to begin this week’s video with a story to help you get to know me a little better before we all get super intimate. You, me, and your English writing, that is.
When I was in fourth grade, I won the school spelling bee. For the WHOLE SCHOOL. Yes, that means I beat out the 5th and 6th graders to represent Waynewood Elementary at the preliminary regionals. Mind you, I was 9 at the time (I’m a June baby, so I didn’t even turn 10 until the very end of 4th grade).
How did I win?
Sure, part of it was luck. Part of it was the fact that I’ve always been relatively detail-oriented when it comes to writing. I wouldn’t call myself a perfectionist, but I honestly can’t recall misspelling a word on a test at school. Ever.
The other motive that contributed to my win was the prospect of getting chips and salsa (those of you who know me know that I love food!). I guess I went through an interesting phase, because I remember coming home from winning my class’s spelling bee and asking “Mom, if I win for the whole school, can we have chips and salsa?” and she said yes.
Now, you may be imagining Tostitos, but we rarely, if ever bought them–too expensive. We bought the generic brand– I think it was Medallion. And a generic brand of salsa. I didn’t mind, I just wanted medium-spicy salsa and tortilla chips.
Anyway, I won the spelling bee and got my chips & salsa.
Side note: as a teenager, I was ecstatic to learn that many restaurants actually put them on your table for free…legit!
The word I won with was “corduroy.” I knew how to spell it because of the Corduroy books–Corduroy the bear. I think there’s even a cartoon for him now. I’ll always be grateful to that author for spelling the bear’s name exactly like the fabric.
Okay. Now that you know me a bit better and understand my background in spelling, it’s time to introduce this week’s video.
The thing is, I started my channel with a keen focus on educational videos for English learners (native Arabic speakers), I didn’t want to be neglectful toward my ESL students here, so I thought it would be a good time to talk about English. Particularly English writing.
One of the services we provide through Lahjaty is English editing–mainly for students in the United States who need proofreading for essays, CVs, formal emails, etc.
Since I’ve been doing this for about 6 years now, I wanted to touch on certain spelling and grammar mistakes that I see a lot.
Interestingly, I go on Instagram and Twitter and see these SAME MISTAKES from native English speakers.
SERIOUSLY?! COME ON!
Y’all have no excuse.
So this video is officially for both native and non-native English speakers.
And if you haven’t yet subscribed to my channel, please do so here:
https://www.youtube.com/c/shannonemaher
Here goes:
1. Peak/pique/peek.
I know they sound the same. I keep seeing “peaked my interest” instead of “piqued my interest.” Pique means to stimulate an interest or curiosity. A peak is like the top of a mountain, or the apex of something. Peek means to look at quickly–so it’s “sneak peek,” not “sneak peak.”
See cartoon: 2. Site and Sight.
We write “what a sight to see!”/”you’re a sight for sore eyes”/”in plain sight.” “Sight” for things we see. Got it? “Site” refers to an area of ground. Like a construction site. Site is also used to mean a website.
now for the fun….
3. Your and You’re.
The easiest way to know which one to write is to think of “you’re” as “you are.” Then you’ll never get it wrong. Your is used to denote possession.
What are your plans today? (the plans are yours).
What you’re doing is awesome. What you are doing is awesome.
You’re happy today. You are happy today.
Now your turn:
______ day was crazy.
Hmm….try “you are” and see.
“You are day was crazy.” NOPE because that sounds WEIRD.
So it’s YOUR. Easy, right?
Now for the other fun ones:
4. Their, There, and They’re
Again, we have a word referring to possession. We write “their dog” or “their house”…their day…you get the idea.
“There” is for a place. The place doesn’t have to be literal. For example:
Person 1: I’m kinda going through a rough patch.
Person 2: I’ve been there, dude. Let me help you out.
In that example, the rough patch was metaphorical–meaning he’s facing difficulties in his life. Person 2 has been in a rough patch before (in his life), so he says “I’ve been there”–at that place in one’s life.
Finally, “they’re” with the apostrophe! When you see the apostrophe, remember “they’re” is “they are.” That will help you figure out if it’s right or not.
They’re going to the party. = They are going to the party.
They’re doing well. = They are doing well.
Easy enough, right?
5. Advise and Advice.
The easiest way to remember which is which (besides the fact that they are pronounced differently) is that advise is a verb and advice is a noun.
Can you give me some advice?
Can you advise me?
They advised me to take the high road.
Woo-hoo, we are halfway done! Still with me?
6. Principal and Principle.
A principle is a rule, a law, a guideline, or a fact.
A principal is the headmaster of a school or a person who’s in charge of certain things in a company.
Principal is also an adjective that means original, first, or most important.
So a principal can have principles, but a principle can’t have a principal. Because a principle doesn’t possess things. You can, however, use the adjective form of principal in something like “her religious principles were of principal importance.”
7. Nip in the butt vs. Nip in the bud
Let’s think about the intended meaning of this phrase for a sec.
We use this to mean “stop something at an early stage” or “stop a potential problem before it develops.”
Right?
Now tell me, has pinching or biting something in the butt ever stopped a problem from developing? I’d think it would do the opposite.
I mean, if you bit a dog in the butt it could attack you. If you bit your neighbor in the butt they might kill you.
I rest my case.
We say “nip it in the bud.” Where does it come from? I’m not a gardener, but I’ve read that people cut off a number of buds before they can develop into flowers or fruit. Why? Because fewer buds means that the plant can devote more energy to those buds, resulting in faster growth and larger fruit.
8.Let’s touch bases vs. Let’s touch base
It’s “let’s touch base.” NOT bases.
I’m not sure where this comes from, but I read that in baseball, a player briefly touches each of the bases when he runs around after hitting a home run; therefore “touching base” means to briefly check in.
Also, we say “they are going to touch base later” or “they’re touching base.” No need to change “base” to “bases.”
9. Tie one over vs. Tide one over.
We say “tide” over. Not “tie” over.
Getting tied over something sounds unpleasant…**imagines movie scene in which victim is tied over railroad tracks!**
This phrase comes from the idea that the tide of the sea moves ships to a new location when the wind will not.
Example: I’m going to the farmer’s market to pick up enough food to tide me over until the delivery guy brings the stuff I ordered.
Now for the big finale…
10. Alumnus vs. Alumni vs. Alumna vs. Alumnae
You’ve probably heard “alumni” a lot. The word refers to a group of graduates/former students (male and female or all male). One could say “I’m a member of the Penn (or other school) Alumni Association.”
An alumnus is one male graduate.
An alumna is one female graduate.  So I’d say “I’m a Wharton alumna.”
For a group of female graduates, we’d use the plural “alumnae.”
If you’re not sure, I’d just write “alum” and be done with it.
That’s it! Hopefully you learned something.
If none of this was new to you, kudos!  I’d say you’re in the minority of English writers.
Please put any comments/questions down below. If you need editing help, please use the form on our website here: http://www.lahjaty.com/editing-help-request/
Love you guys! <3 Have a great weekend!
P.S. Useful Links:
My Ring Light: https://amzn.to/31tOP8l
My cam: Canon – https://amzn.to/2OlyNro
My mic: Rode – https://amzn.to/2SgGmkm
Our books: http://www.lahjaty.com/product-category/books/

13 Self Tanners from AMAZON– REVIEWED and RATED