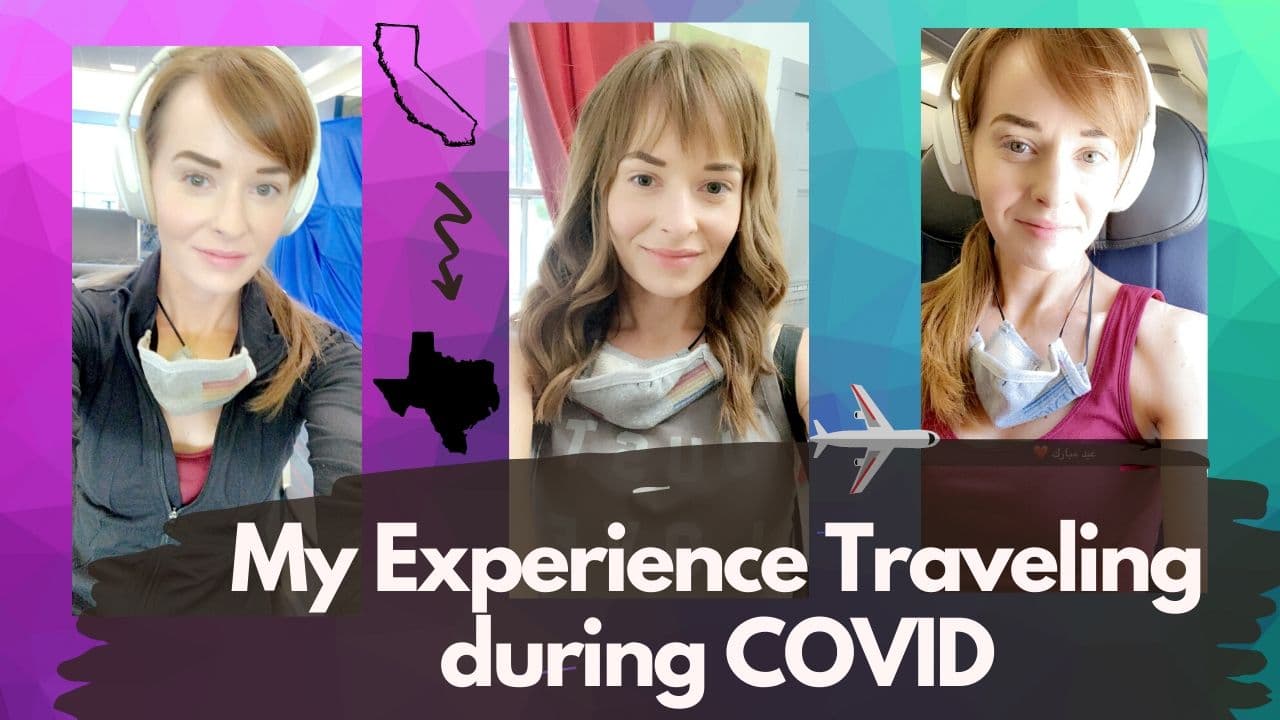 Today’s vid comes a day earlier than usual…but this week is special because it’s the week before my birthday…so I wanted to give you two videos. One today, one tomorrow. Enjoy!

I just got back from my first trip to Houston! I was there for Memorial Day weekend. As many of you know, LA is currently under a “safer at home” order. Texas is not.

As one can imagine, I was super excited to see my relatives and do things like eat in a restaurant, get my hair cut, get my nails done, etc. I also had an in-person job interview, so I was looking forward to that too.
Regarding COVID-19, I had an antibody test about two weeks prior to my travel date.
My results came out negative: Yes, there can be false negatives and false positives, etc. but I figured that testing negative for antibodies would help put my friends’ and relatives’ minds at ease when in Texas.
However, the Tuesday before my trip – May 19th — my cousin sent me this screenshot about how Texas has a mandatory 14-day quarantine for people traveling in from California, and other states like New Jersey, New York, and a few cities like Miami and Atlanta: Naturally, I freaked out…I had a whole itinerary planned. I even made the appointment to get my hair cut three weeks before my trip. Seriously.

I called the salon and started with “Houston, we have a problem.”

I’d always wanted to say that….

Also, my cousin had made reservations for us all to have dinner, etc.

I had NO idea about this quarantine requirement until May 19th!

After two long days of anxiety and stress, news broke on May 21st that Gov. Abbott had lifted the quarantine restrictions for incoming travelers–effective immediately. I was SO HAPPY. I honestly didn’t know what I was going to do otherwise.

So…the trip to Houston was happening. On Saturday morning my friend drove me to the airport. I was over an hour early just because I didn’t know how things would be, if i would have to get my temperature taken, etc.

To my surprise, it was actually a very fast process…I checked in online and wasn’t checking any bags, so that saved me some time. Going through security was extremely fast, too.

I went to my gate and found it pretty crowded (as you can see in the video)…I thought it would be dead but there were actually quite a few people there. When we boarded the plane, the flight attendant gave everyone a brown paper bag with a bottle of water and some snacks.

One thing I did not expect is that my flight was full…I’d say over 80% of seats were filled. No empty seats in my row, maybe one empty seat in a row in front. There was no food service on the flight. I noticed that a lot of people wore masks, but some didn’t. No one said anything, so I guess it’s not strictly enforced.

I had a layover in Dallas. Again, the airport seemed pretty empty. The terminal I arrived in was very quiet, but when I switched terminals for my next flight, I noticed it looked quite full. Again, I had a full flight to Houston.

I arrived on Saturday afternoon and got my rental car. When I settled in to my neighborhood I took a walk around and saw that bars were open, and people were sitting on patios at restaurants (what a sight, for someone coming from LA where restaurants haven’t been open for sit-down since March!)

Around my neighborhood (Midtown), I saw people walking dogs without masks, but still practicing social distancing. It was a markedly different vibe from what we are experiencing in LA. I feel that in LA people are more…fearful. Or maybe it’s just the Texan-independent vibe I was feeling there…not sure.
When I went to the hair and nail salon, I wore a mask. Everyone had to. In the grocery stores I visited in Houston, most had a sign outside saying you should wear a mask, but maybe half of shoppers were actually wearing one. It’s not strictly enforced like it is in LA.
When I arrived in Texas, the current situation was that bars could operate at 25%. As part of  Gov. Abbott’s second phase in the state’s reopening, bars and clubs could open at 25 percent capacity and restaurants at 50 percent as of May 22nd.
I read on Tuesday that the mayor of Houston  received 180 complaints on Sunday night about people not following the social distancing orders (here).
I was not involved in any of the rule-breaking… I have an alibi 🙂 I spent the afternoon/evening at my cousin’s house with my aunt and uncle, and their 3 dogs and horse and pony. A short clip is included in the video for reference.

In LA, the situation is so different. You are supposed to always carry a mask with you when in public and wear it inside all retail establishments. Restaurants are closed for dine-in, salons are closed…just a totally different feel.

I returned to Los Angeles on Tuesday, May 26th. Again, the airport security went quickly and smoothly. My flights were pretty full again– to both Dallas and LAX.

One note on the airport restaurants and retail: in LA, there were places open for take-out. There were a couple tables where you could sit and eat your food you got from the counter. In Texas there were more sit-down restaurants open in the airports–just not at full capacity. A number of retail shops were still closed, however. Places like Starbucks, Chick fil A were only to-go.
Again, most people were wearing masks around the airport but if you weren’t, no one really batted an eyelash. I would say I saw fewer masks in Texas than in LA overall. One person I met up with in Houston said he didn’t even own a mask…he told me that a doctor informed him that they aren’t effective for people with facial hair, and that it needs to be pressed against the skin all the way around and removed a certain way. He said bandanas etc. are not effective.
Overall it was a fun trip, definitely smoother than I thought it would be. I imagined that maybe the CDC would be there asking people why they’re traveling, etc. but nope, nothing like that. They didn’t take anyone’s temperature, they didn’t make you Purell in front of them before getting on the plane, no one said anything if you weren’t wearing a mask…people even brought their dogs on board.
Hopefully you enjoy this video!
and if you haven’t done so, please SUBSCRIBE, LIKE, and Comment here:

“He Wanted A Second Wife” – Sara’s story of Marriage, Infidelity, and Divorce in Saudi Arabia

App update is out!

Get TF Out of Beginner’s Arabic! Time For Your First Lesson.