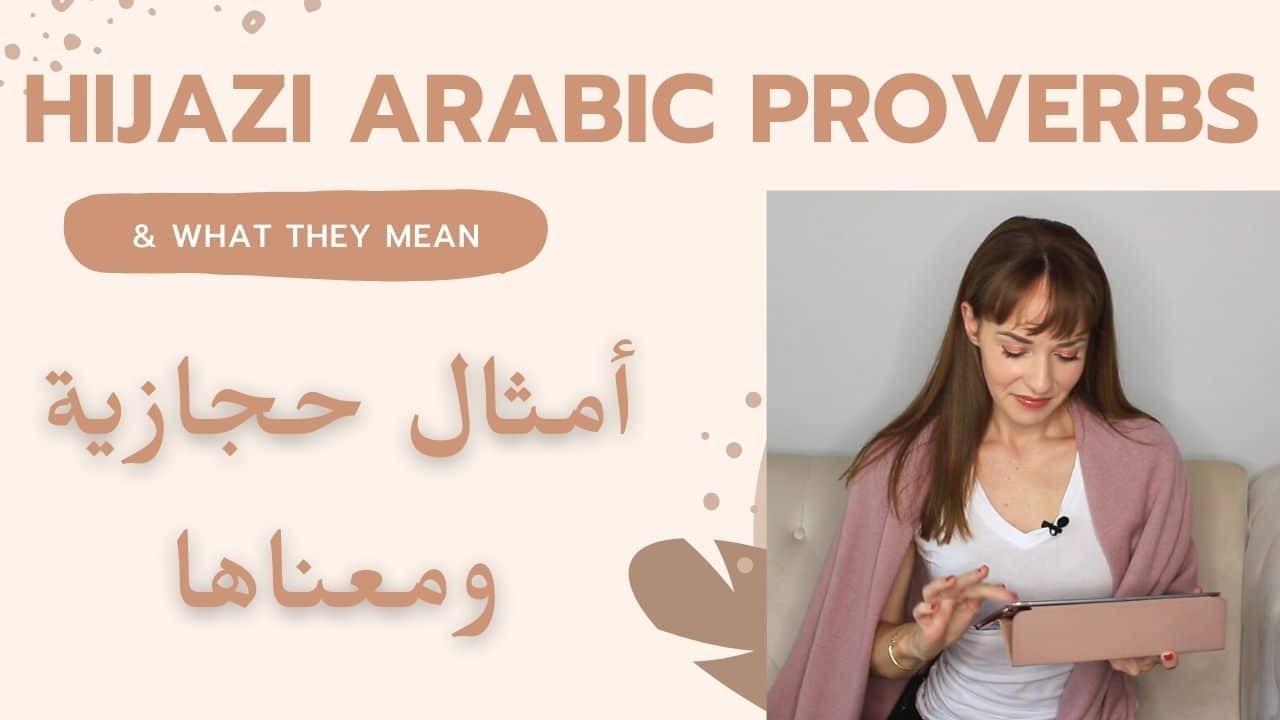 When I was studying Hijazi Arabic, my teacher gave me a list of proverbs.

First: for those of you new to Arabic, what is Hijazi? It refers to a dialect of Arabic spoken in the western (Hijaz) region of Saudi Arabia (Mecca, Medina, Jeddah). It differs from Najdi (Riyadh and surrounding region), southern and eastern region dialects. As with any region, they have their unique idioms and proverbs.

While editing this video, I tried to check the meanings of these against other sources online and found VERY LITTLE information on the internet about them.

Here are the proverbs included in the video:

If you see someone who is barefoot, be reminded of how lucky you are/be grateful for what you have.

Roughly: “who do I complain to, when everyone is wounded?” Means that everyone is going through problems/challenges of their own.

Roughly: How do I remember you, onion, when with every bite tears come down? It is about someone who you continually have bad experiences with — to the point that you associate them with sadness/negativity.

Roughly: Cut the tongue of your enemy with ‘peace upon you.’ Kind of like ‘kill them with kindness’/take the high road.

Roughly: Whomever you accompany, agree with him/her. Means something like “be agreeable with the person you are with” — I imagine someone you walk with or have a journey with (like a road trip)– be agreeable and don’t start arguments.

Roughly: Whoever doesn’t fear God– be afraid of that person! And I think it means be wary of those who have nothing to lose.

Roughly: The person who sees a dome thinks it’s a shrine. Not sure about the exact meaning on this one (appearances can be deceiving?)

Roughly: What does the unlucky (man) bring to his mother? Meaning/application: Not exactly sure! Hoping viewers can give some insight.

Roughly: When I revealed, I revealed my shortcomings, and when I tore, I tore my clothing. Meaning: also not 100% sure when we’d use it, but it could refer to someone trying to do things that backfire(?)

Roughly: People of mind in comfort, crazy people in the arena.

Roughly: The unlucky person and the loser were reunited.

Roughly: Hit your son and his manners will improve; he won’t die until it’s his time.

Roughly: I take care of my needs/obligations with my own hands, and I don’t tell the dog “yes sir.” I feel like it refers to people who don’t like having a boss/who do their own work for themselves and don’t answer to anyone.

Roughly: kill your cat on your wedding night. I’m assuming this is a way of telling a guy to show his strength to his new wife?/intimidate her?

Roughly: whoever doesn’t listen to the words of his/her elders falls into the well. Meaning: respect your elders/the wisdom of older people.

Roughly: turn the pitcher upside down, and the girl becomes her mom. Meaning: like mother, like daughter.

Roughly: feed the mouth and you make the eye shy. Meaning: TBD, but possibly like “one is less likely to bite the hand that feeds them.”

Roughly: the father of daughters is blessed/prosperous.

Roughly: they clung to spider ropes.

Roughly: the one with a bump on his head feels it. Meaning: someone who makes a mistake or who was at fault gets really sensitive and takes things personally.

Roughly: the one whose house is made of glass doesn’t throw bricks at people. Meaning: those who live in glass houses shouldn’t throw stones.

Roughly: he without a mother is in a sad situation.

Roughly: he who is shy of his cousin won’t get a son from her. Meaning: to give some context, it’s not uncommon to marry one’s first cousin (at least in Saudi Arabia and other gulf countries). It’s not as common as it used to be, but still—one would not raise an eyebrow if you told them you were marrying your cousin. That said, I think the meaning is supposed to be around encouraging confidence. If anyone has more details, please share.

Roughly: the mother nests and the dad annoys. Meaning: I wasn’t sure if this is a joke/common saying (like we have in English “men are from Mars, women are from Venus”), but perhaps it is meant to suggest how men and women are wired differently.

What are your thoughts? ايش رأيكم؟

As always, please LIKE and SUB <3 شكراً على دعمكم

What Hollywood gets WRONG about Arabs, The Middle East, and Arabic

I have 14 siblings. Here’s what I REALLY think about Only Children…

How Does One Become an Arabic Translator? Interview with Dr. Mohammad bin Naser