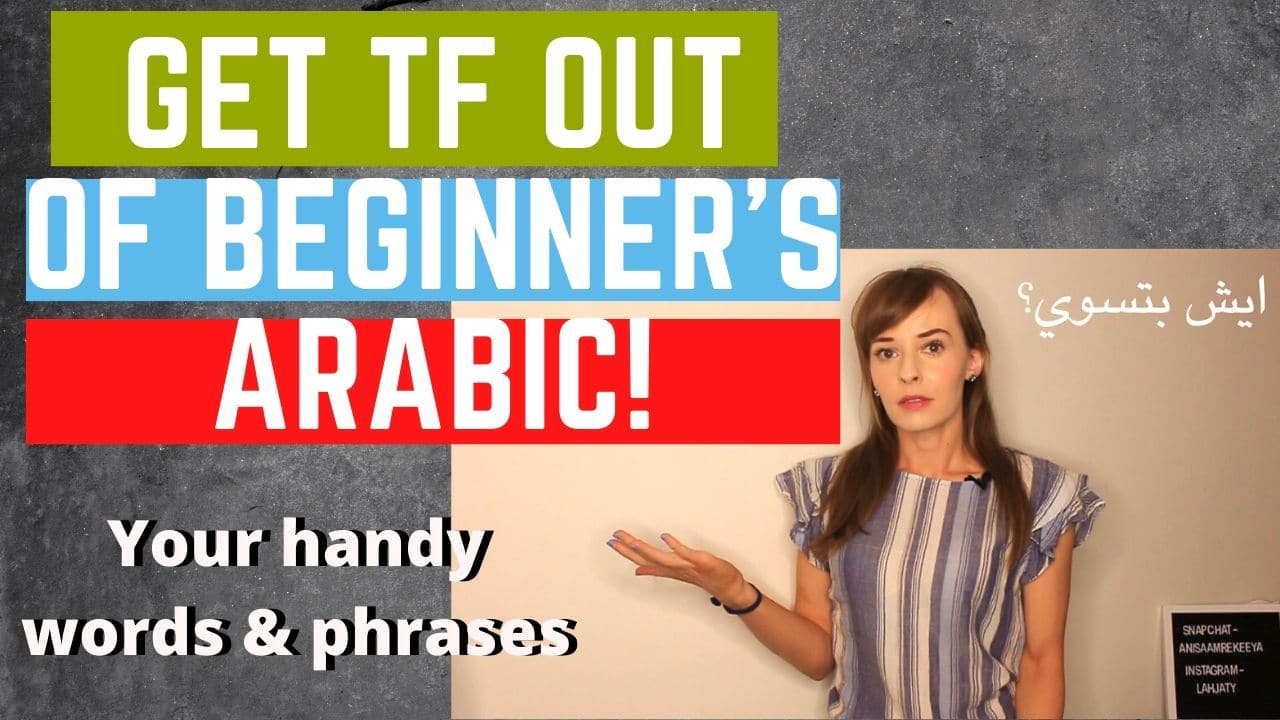 Useful words and phrases for getting fluent FASTER

Given recent events and a lot of people staying indoors, taking online courses, watching Youtube, etc.
(please LIKE and SUBSCRIBE if you haven’t already:
https://www.youtube.com/c/shannonemaher)
…I’ve been getting more requests for English lessons via our website.
Something I didn’t expect, however, is a growing number of inquiries from people looking to learn Arabic.
A few of the inquiries are from folks with zero Arabic knowledge looking to learn from scratch, others are from people who took a course years ago and want to brush up, and others are folks trying to learn with Al-Kitaab and similar books (MSA = Modern Standard Arabic), but feeling frustrated af.
The truth is, for a long time I’d always shied away from offering to teach Arabic.
Because…well, as you know, it’s not my native language.
However, being stuck inside and succumbing to California’s social distancing mandate has led to bouts of self-reflection and evaluation.
During such bouts I have re-examined my Arabic journey.
Facts:
-I spoke zero Arabic when I moved to Dubai in 2010
-I acted in three primetime Arabic tv series on MBC (starting in 2014 with واي فاي season 3)
-I co-hosted an Arabic talk show for Dubai TV (2016)
-I wrote three books for Arabic/English education, two of which I published (the first was published in KSA by Madarek)
-I created the app العامية الأمريكية for iOS and Android, which reached #2 in Saudi Arabia paid apps during its first week of release. With zero spent on marketing. Thanks to a lot of awesome Snapchat fans and friends.
Conclusion:
maybe I’m actually a better candidate for teaching Arabic than I give myself credit for.
That said, as many of you know from my interview with Phil, I learned Arabic the way that most non-native speakers learn- and that’s with a book…er…a series of 3 textbooks we refer to as Al Kitaab method (الكتاب في تعلم العربية).
see that in the parentheses? yaaasss fam I typed that all by myself! 😉
As I mention in the video, Al-Kitaab is pretty legit. It’s probably the best thing out there for helping you get a strong foundation in Arabic.  Remember that it’s primarily concerned with “fusHa”- Modern Standard Arabic, which is the Arabic they speak on the news, and the kind they write in news/magazine articles.  The books also include CDs to help train your ear for Arabic (don’t worry if you have to listen a bunch of times to each sentence, I had to also, in the beginning).
If you don’t have Al-Kitaab yet or don’t feel ready, here is the book for total beginners:
https://amzn.to/2U4hugy
Here is Al-Kitaab 1, if you already know Arabic letters and sounds:
https://amzn.to/2Q9oho4
Looking back on my Arabic learning experience, how would i change it?
The first thing that comes to mind is something that Phil also mentioned:
It would have been nice to learn more slang/colloquial words and phrases from the beginning.
Why?
Case in point:
Let’s rewind to my first or second month of learning Arabic. Mind you, I was waking up at 6am to go to class from 8-10am Sun-Thurs. After class I went straight to work at MBC (10am-7pm).
I recall saying صباح الخير to one of my colleagues one day (“good morning”). She was impressed and asked me a simple question:
كيف العربي؟ صعب ولا مب صعب؟
I had never heard of the word مب …
I knew that صعب means “difficult”…
I figured that her question meant “how’s Arabic? hard or not hard?”
But in the moment I was totally thrown off by that word “مب”  (it means “not” in informal Arabic).
And for those of you who can read Arabic letters,
مب sounds NOTHING like ليس – the formal way of saying “not.”
As you can imagine, I was extremely frustrated because I had been diligently studying for what felt like ages, and I couldn’t answer a simple question from a native Arabic speaker.
Because of that experience, I made this video to teach you a few words and phrases that you may find beneficial, whether you’re a total newbie to the language or you’re stuck in beginner’s Arabic. Maybe you’re in a phase where you know formal Arabic but no colloquial phrases.
I’ve been there, and it sucks. So watch my video (and read on, if you can’t watch RN).
First- let’s address the 5 “W’s”
Namely:
Who What Where When & Why
Who:
in formal Arabic – مَن
informal- مين
What:
in formal Arabic- ما / ماذا
informal- ايش/شو/وش
Where:
formal- أين
informal- وين/فين
When:
formal-متى
informal-امتا or متى

formal- لماذا
informal- ليش
Here are some other useful words/phrases:
as mentioned earlier,
ليس / ليست = not (in formal Arabic)
in colloquial Arabic you can say
مو or مب or مش
The word “now”:
formal Arabic – الآن
colloquial (a few options here): الحين/ هلا / بالوقتي/ دحين
the person which/the thing that
formal Arabic – الذي/التي
colloquial – اللي
“those” in Formal Arabic – هؤلاء
but informal would be like – هذول / هذولي
this/that:
formal – هذا/هذه
informal – ذا/ذي
instead of writing out على to mean ‘on’
you can write just ع
the verb for “put” in formal Arabic – ضع
in slang we say (an easier word) – حط
Some other useful phrases:
I don’t feel like it. — ما ليا نفس
What are you doing?
in formal Arabic: ماذا تعمل؟
colloquial: ايش مسوي؟
The past tense for “did” is سويته (I did it).
I want (water). In formal Arabic, أنا أريد ماء
but in colloquial Arabic I say أنا ابغى مويه
I speak more of a Saudi dialect…so that’s what I’d say. But there are many words for “want” depending on the dialect.
In Egypt they say عايز
In Shami/Levant region they say بدي  for “I want”….
and the way I write “water” is more Saudi (مويه)…
in other dialects they write it as مي or ماي.
Finally…
Thank you = شكراً
You’re welcome – in formal Arabic is عفواً
but often people write العفو
and a really nice thing you can say when people thank you is –
لا شكر على الواجب
لا شكر ع الواجب
it basically means – ‘don’t thank me, it’s my duty/ don’t mention it.’
When I say احبكم it means “I love you” but can also mean “I like you.”
the verb حب can mean “to like” or “to love” depending on context.
If you want to say that you liked something–and have no confusion–you can use
عجبني — which is kind of like “it pleased me”/”I liked it.”
Also, I use a word مرة quite a bit. It means “a lot” or “very.” In formal Arabic we say جداً or كثير – in slang you can say
مرة
or in Emirati/Qatari and perhaps a few others they say وايد.
In Iraqi I believe they say هوايه
In Egyptian they say قوي ….
and that’s it (for now)!
Hopefully you found this useful. Any questions? Please feel free to write them in the comments below and I’ll get back to you ASAP.
Once again, please LIKE and SUBSCRIBE to my channel if you haven’t done so — the Youtube algorithm is real af. Plus…you don’t want to miss out on my next video. Trust me.
Here it is:
https://www.youtube.com/shannonemaher
Thank you!
<3 Shannon

MUST Watch before getting an Arabic tattoo

Addressing the Backlash re: Sara’s Story

How to FIX a BAD Arabic Tattoo: from a Translator